People already had their heart set on Chris Ballard. He was the golden boy from Kansas City who’d built his reputation helping to construct the 2006 Bears team that reached the Super Bowl. It was time for him to come home. The announcement of the Pace signing came as abrupt left turn by an organization known for liking to keep it within the family. This was something new, something different.

People were starting to doubt Pace and whether he’d done his job. Then a funny thing started to happen. The Bears strung together some wins. They beat a good Ravens team in Baltimore and then beat a good Panthers team last week. This doesn’t include them beating a good Steelers team back in September. It’s worth noting the combined record of their three defeated opponents to date is 13-9. Suddenly it is a team that is young, fast, athletic and smart. They have a stiff defense, punishing ground game and a confident young rookie at quarterback.

The key contributors to this sudden turnaround are nearly all Pace acquisitions:

The best part is that of all those names listed, only one of them (Sitton) has hit the 30-year old age barrier. This means the Bears core of talent is relatively young and has a chance to grow over the next few seasons. In fact it’s already doing that with each passing week, guided by an experienced coaching staff. Having already equaled their win total from 2016, there are preliminary thoughts they could go after a playoff berth.

It might be too soon for that, but it is at least time to start thinking about giving Pace the credit he’s due. This team is on the upswing and looking better than it has in years. If Trubisky pans out as expected, this man has set the franchise up for years. Better still? He’s only 40-years old. Chicago could see him around for a long time to come.

I agree with the highlighted comment above.... Pace deserves a little love.  This team was in shambles when he stepped on board and he has brought back at least a shred of dignity and removed the stench from this defense that Tucker destroyed.  Still a very long way to go but no one said it was going to be easy.

Other than Cody Whitehair, I agree, it is time to pick up the Pace, and start respecting the man.

Keep Calm, and listen to Pink Floyd, and Black Sabbath. 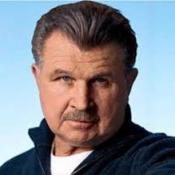 Other than Cody Whitehair, I agree, it is time to pick up the Pace, and start respecting the man.

Whitehair is a good guard. He just needs to go to snapping school

I completely agree, he doesn't get as much credit as he deserves, it seems like there's genuine hope now, especially after these last few weeks.

Again we go back to that? Fox hires his assistants. The best we can hope for is Pace to tell Fox that if he does not fire Loggains Pace will let Fox's replacement do it.

Again we go back to that? Fox hires his assistants. The best we can hope for is Pace to tell Fox that if he does not fire Loggains Pace will let Fox's replacement do it.

I agree Pace is doing a great job withe the needle pointing up for the Bears. I like what he has done in his drafts. His selection of free agents could be a little better. I hope he cans Fox and Loggains after the season , and hires an offensive minded.

Please come back. Please forgive me. I was wrong to end things with you in Chicago two years ago. I was young and inexperienced when we parted ways. After you let me down against the San Francisco 49ers with those two missed field goals and then again against the Washington Redskins when you missed the game-winning kick, I overreacted. Those misses hurt Robbie, but I regret my actions. I took the mistakes you made as a sign it was time to move on when I really should have just looked at your history and seen all you had done for the city of Chicago in the past.

If I could go back, I would have paid better attention to the fact that you were the Bears all-time leader in career points (1,207), field goals, (276), and field goals over 50 yards (23). I wouldn't have overlooked that you are the 6th most accurate field goal kicker in NFL history (for reference, Adam Vinatieri, a future hall of famer, is 14th on that list). You were only 34 years old when I kicked you to the curb, which is just the middle of a kickers career. You still had so much to give and I didn't care.

Robbie, please understand; I was young and still new to the city of Chicago when I decided to make you leave. I didn't even know what Portillo's was yet; how was I supposed to understand what you meant to this city and just how dependable you were. I wanted the freedom to pursue other kickers because I thought there were better ones out there. But, as the saying goes, the grass is not always greener on the other side and trust me, that couldn't be anymore true.

I want to be honest with you Robbie, so I will admit that I have gotten around since you left. I got around a lot; most would even call me a kicker slut. I brought in Connor Barth, Roberto Aguayo, Mike Nugent, and Cario Santos. I paid them to take your place and all they did in return was disappoint me. After using up and tossing out those kickers, I thought I finally thought I had found someone to bring in to replace the void you left on my special teams unit. I was wrong Robbie; very wrong.

I gave Cody Parkey a 4-year $15 milion deal, but all he has done so far is disappoint me more than you ever did. I can't count on him. He was young and still has his hair Robbie; he seemed like more than a rebound kicker. So I paid him to be the kind of kicker you were for this franchise for all of those years. However, after he missed two field goals and two extra points against the Detroit Lions on Sunday, I am already having doubts. You would never do that to me. Do you know how I know that Robbie? I know that because you missed two extra points total during your first eight seasons with the Chicago Bears. I also know that because you made the "commute" to Soldier Field to practice kicking on our home field. Parkey didn't feel like he needed to put in the extra work on our home field to adjust to the unpredictable conditions Lake Michigan provides our home field with. Can you believe him? After all I did for him? He is a kicker; what better things does he have to do other than prepare for his job? I guess he just doesn't care like you did Robbie. I may just have a bad taste in kickers I guess.

I will admit it is hard to watch you with your new team. They are not better than us, but that doesn't help the jealously I have for that franchise in the bay city. Over the last few years, they have not only stolen you, but also draft picks from me. I hate them Robbie. I really hate them. I want you back. Please return my calls. Please return my texts. I don't care that I guaranteed Parky $9 million; I will take you back in today. I miss your accuracy. I miss being able to count on my kicker. I miss your bald head. Come back. Please. We need you. I need you.

So three years of playing time and imo it's now fair to go back and look at Pace's first Draft.

When you look at Pace’s first draft, he landed three quality starters in Eddie Goldman, Adrian Amos and Bryce Callahan. He most likely would have had four if it wasn’t for the injury suffered by Cameron Meredith.

If you ask any GM if they would be pleased with three to four starters out of one draft, most of them would sign on the dotted line immediately. Where Pace’s biggest issues were is that his misses were giant misses.

None of Pace’s other selections from this year even became contributors to the Bears in any way. When those players did play, they were a detriment to the team. If the Grasus and Langfords of the world became serviceable, Pace’s grade could have jumped to a B+ or maybe even an A-, but while he was able to land starters from this draft, he wasn’t able to build depth.

Regardless, while this draft will be remembered for the Kevin White debacle, the truth is that Pace found several solid players and some are still key components to the organization four years later. Overall, Pace’s first draft was a solid one.

I think the author makes some strong points but his overall grade is too high for me.  I edited his individual player evaluations but below are the score's he gave:

I wouldn't even argue the individual grades too much, just the overall.  I think White drags that overall grade down a bit more to the C, C+ range.  You don't get many chances to pick 7th overall so a swing and a miss there is huge.  I've been pulling hard for Kevin but sadly, this last season seals the deal.