Well Bears Fans, this season is in the Bag!

Fields broke records as a QB in Chicago.

Monty gave us his all.

Roquan threw a tantrum and got traded.

Quinn was shipped off for having his usual off year.

Secondary was a bright spot.

Brisker was a good pick.

Braxton Jones played all 17 games and is the defacto LT.

Poles stuck to his plan.

Bears have the number 1 pick for the first time since 1947.

Lovie finally went for it and got a win for the Bears on his way out the door. 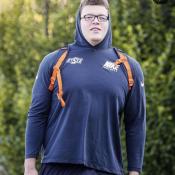 Still a tremendous difference in the roster talent of the Bears and any of the playoff teams!

Poles & Co. will need a second season to close this discrepancy. Don't think all the holes can be plugged in one off season.