USFL teams reveal their uniforms for the 2022 season

The NFL offseason has just begun, but that doesn't mean fans will have to wait long for live gridiron action. The United States Football League will debut on April 16, with all games taking place in Birmingham, Alabama.

The league is composed of eight teams split into two divisions. The North Division has the Michigan Panthers, New Jersey Generals, Philadelphia Stars and Pittsburgh Maulers. The Birmingham Stallions, Houston Gamblers, New Orleans Breakers and Tampa Bay Bandits are in the South Division.

On Thursday, teams revealed their uniform combinations for the season. Some teams opted for vibrant ensembles, while others decided on darker looks.

Here's a look at the new threads for each team: 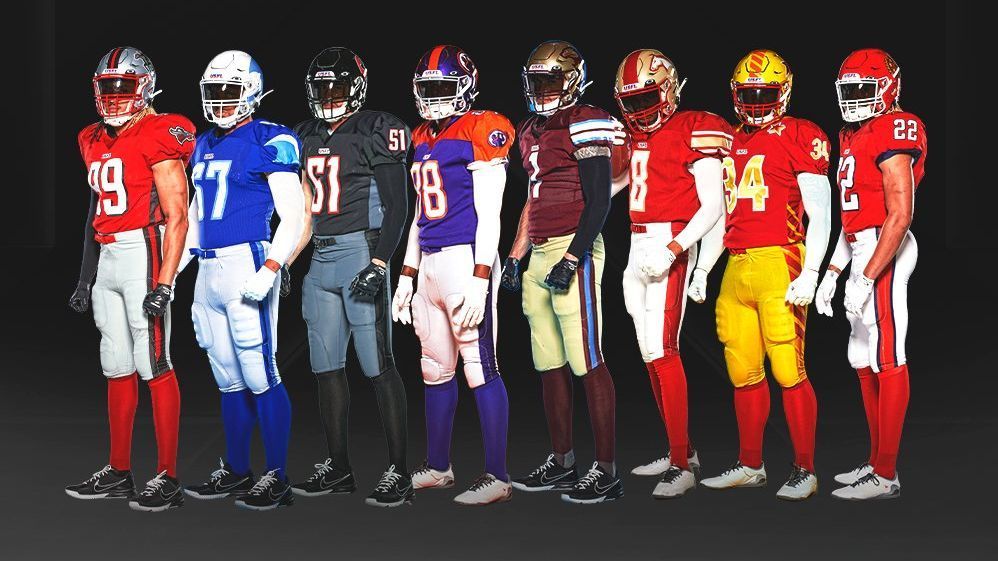 The Panthers' fit features gold and maroon, with the logo covering both sides of the helmet. Michigan also has the No. 1 overall pick in the league's draft on Feb. 22. Jeff Fisher, the former Houston Oilers/Tennessee Titans and St. Louis/LA Rams coach who led the Titans to the Super Bowl in 1999, will head up the team.

The Bandits are led by Todd Haley, who spent 22 seasons as a coach in the NFL. His team's uniforms for home and away games share many similarities, except for the jerseys. Red is used for home games and white is for road contests.

The Stars took a vibrant approach to their look this season. Their head coach is Bart Andrus, who's spent time in the NFL, Canadian Football League and the United Football League.

Home and aways are out of this world

The Generals' ensemble features red and white. They will battle the Birmingham Stallions in the USFL's first game on April 16. Mike Riley is the head coach for this squad, and has 27 years of coaching experience: 10 in the NFL and 17 in college football.

Down in Texas, the Gamblers have very different looks. At home, the threads are dark. On the road, they opted for a much brighter look. Kevin Sumlin is the head coach for Houston. He has history in the Lone Star State, coaching the Houston Cougars from 2008-11 and the Texas A&M Aggies from 2012-2017.

The second Pennsylvania team in the USFL, the Maulers revealed eye-catching, two-toned jerseys. The squad's head coach is Kirby Wilson, who coached in the NFL for 24 seasons before taking this position.

The Breakers' uniforms feature their team logo on the shoulders of their home and away sets. Larry Fedora, who last coached in 2018 with North Carolina will lead the squad. He and Fisher were the final two coaches hired in the USFL.

So, yet another "Spring" Football League. Does anyone care? The last several tries at this ended in Bankrupcy. With Dewayne "The Rock" Johnson rebooting the XFL in 2023 will this league even be around to compete with the XFL. XFL has recently signed a working agreement with the NFL for Player Safety and Game innovation. As goos as an endorsement as you will get from the Shield.

The idea of Teams from various states, but all the games are to be played in the same stadium in Birmingham. How is this going to endear teams to fans??? What will players say when signed to a team?? "I look forward to working in living in a city, totally not the one stated on my contract!" How will a player be active in his city? Through Instagram? I vote for sending Lifesize cutouts of the players and positioning them around their "Cities" so the fans can get to interact with their cutouts!

The USFL will return in April. Unless it doesn’t.

The owners and executives of the original USFL have sued to block Fox from launching a league that uses the brand and team names of the spring league that was founded in 1983.

In a complaint filed Monday in a California federal court, an entity known as “The Real USFL, LLC” seeks an order preventing Fox from using the USFL name and the names and logos of any of the 18 teams that played in the original USFL.

The plaintiff alleges that Fox’s USFL “is an unabashed counterfeit,” and that Fox has taken the league’s name, eight team names, and eight team logos “to which it has no right.”

“It has traded on the false narrative that Fox’s League and USFL teams are the offspring of the original,” the complaint contends at paragraph 4. “They are not.”

The original USFL raised its concerns publicly last year, after Fox announced plans to bring back the USFL. Negotiations occurred, but Fox allegedly made it clear that it “had no intention of discussing the matter further.” Eventually, Fox claimed that the USFL had been defunct for more than 30 years, and that it had abandoned its trademarks.

The lawsuit includes claims for trademark infringement, false advertising, and false association. Ultimately, the case boils down to whether the original USFL retained the rights to the league name and the team names and logos. If the legal system concludes that it does, Fox has a very real problem.

“Fox could have easily started its own league with new teams, but instead chose to take the goodwill and nostalgia of the original league without the permission of the people who actually created it,” attorney Alex Brown said in a press release. “Fox can’t dispute that the ‘Real USFL’ marks are recognizable and valued because they’re using them and purposefully confusing its league with the original. Rather than do the right thing, Fox has chosen to try and bully the prior owners into submission. That’s not going to happen.”

Well, it is the USFL. Litigation was inevitable, right?

A simple answer, just change the names/Colors of the teams and call the League the UFL "United Football League" or even better "Universal Fox League"

Personally, I think this "new" startup Spring League is doomed to fail anyway.

I have no clue what makes people keep trying to make this work. It seems pretty clear that the NFL has no desire to see a "minors" style league succeed.

I have no clue what makes people keep trying to make this work. It seems pretty clear that the NFL has no desire to see a "minors" style league succeed.

Dwayne "The Rock" Johnson bought the XFL rights. They are starting up next year and have already signed a development deal with the NFL. So actually, the NFL is interested in the "right" minor league. They are to cooperate on rule tweaks and safety issues/technology.