POST COUNT: 8972
Is the cat out of the bag, do Refs intentionally alter the course of the game?
0

The Hall of Famer is far too facile an NFL broadcaster to go overboard when a carny show is unfolding on the field.

But that's what it was as the "yellow pixies" -- those remarkably timed, baffling calls by officials -- enabled the Bears to bounce back and "beat" Tampa Bay 20-19.

The No. 1 implicit charge of a contemporary NFL officiating crew, for those not paying close attention, is to hold audience as deep into a telecast as possible.

Occasionally -- as in Tennessee's 42-16 dismantling of Buffalo Tuesday -- a team is so ill-prepared and lacking focus such doctoring would stretch credibility too far.

But too many blowouts like that would also cost the league viewer interest and, in the end, advertising and other ancillary dollars.

So we have L'Affaire Bears-Bucs and two game-changing "calls."

The article goes on to explain the two wrong calls that allowed the Bears to get their comeback (thankfully they did not smear Fullers hit) But the highlighted was what caught my attention. Maybe it is just a writter trying to get clicks and shares, or is it a writter admitting what many of us have suspected for a long time.

Who can say that they have not often wondered WTH with the way some games were called? How many of us ranted many times about GB always getting help from the 13th man on the field? Maybe we were not crazy, maybe we were just the ones burned enough times to finally stop denying it.

POST COUNT: 8972
Re: Is the cat out of the bag, do Refs intentionally alter the course of the game?
0 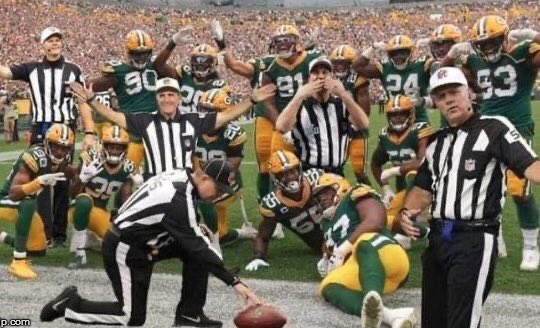 POST COUNT: 2164
Re: Is the cat out of the bag, do Refs intentionally alter the course of the game?
0

I have suspected these games are rigged for a long time.

POST COUNT: 8972
Re: Is the cat out of the bag, do Refs intentionally alter the course of the game?
0

Let’s say you were given an endless “Get Out of Jail Free” card. What would you do with it? Would you commit crimes? Steal? Kill somebody? Try to rule the world? Would you settle for, say, $14 billion a year?

That’s the luxurious position the NFL finds itself in when it comes to its court-granted right to fix the outcome of professional football games. There is no question the NFL has the legal right to fix a game. Any game, including the Super Bowl.

So, then, the real question becomes: Does it?

Just so we’re clear: In 2007, the New England Patriots were caught cheating, videotaping opponents’ formations and coaching signals — even with evidence destroyed by NFL Commissioner Roger Goodell. Turned out they’d been doing it for 10 years. A Jets fan and season-ticket holder, Carl Mayer, sued the Patriots, asking for reimbursement to all Jets fans who went to those games. He lost. But why did he lose?

If you read the brief one-paragraph explanation that ran in The New York Times on May 19, 2010, you’d only learn that “Mayer failed to prove any legal right to damages.”

OK, but why not? Google and Bing your way around the internet and you’ll find explanations hard to come by from any sports, business or legal reporter. But at least the court decision is online, and you can read it for yourself.

Since you probably won’t, here’s the tl;dr: The NFL argued, and the court agreed, that people who buy tickets to an NFL game have the contractual right to a seat to watch two teams play each other, and nothing else. The court even quoted Mayer’s ticket stub, which reads: “This ticket only grants entry into the stadium and a spectator seat for the specified NFL game.” (emphasis added) If the Patriots cheated to win that game, well, tough. Legally extrapolate that and it means: If any NFL outcome is fixed, well, tough.

Also in 2010, in a separate court case against the NFL over branded items like hats and shirts, the league presented itself not as 32 separate teams, but as one singular business “unit in the entertainment marketplace.” Throughout that case, the NFL repeatedly positioned itself legally as a “sports entertainment” business, not a genuinely contested “sport.” College football, for example, is legally classified as a “collegiate sport.” The only other “sports entertainment” businesses are professional wrestling and roller derby.

Financials back up the NFL’s case that it operates as a single entertainment business unit. Some 75% of all revenue is shared equally among the NFL teams, far more than the NBA (roughly half) and Major League Baseball (about a third). Thus, with the vast majority of NFL revenue coming via television rights, it most certainly behooves all teams to provide the best possible show in the “entertainment marketplace.”

So how’s that coming along? Well, there’s no question Super Bowl contests have become much more entertaining in the past 15 years — as these legal battles were playing out — than they were in the previous 35. To wit:

FWIW, if you add in this year’s big game, half of the Super Bowls since 9/11 have featured the red-white-and-blue Patriots of New England. Two of the 35 prior did.

Are the Patriots that good? No. We know for a fact they cheat, because they’ve been caught. But worse than that, there is too much video evidence that shows, again and again, favoritism for the most “Patriotic” of American football teams.

So we’ve got the legal foundation. We’ve got circumstantial video evidence galore. The rest basically comes down to the NFL and Establishment sports media asking fans: “Who you gonna believe? Me or your lying eyes?”

But if you won’t believe your lying eyes, and you won’t believe me, will you believe the thinly veiled revelations of some of the game’s players? Here are a few that have popped up in the past couple years, with links to the original sources:

"And we all know, now that we’re grown men, that wrestling’s fake. Well, football is not played like it was when I played." -- retired Houston Oilers RB and Hall of Famer Earl Campbell

"We're talking about a different NFL now ... before it was more about the game. Now it's such an entertainment business. It's turning into the WWE really. It's like the Vince McMahon stuff. Basically, [Roger] Goodell is like Vince McMahon." -- Cleveland Browns tackle Joe Thomas

"[The NFL is] like a spectacle of violence, for entertainment, and you're the actors in it. You're complicit in that: You put on the uniform. And it's a trivial thing at its core. It's make-believe, really. That's the truth about it."-- former 49ers linebacker Chris Borland, who retired after a single season.

So how was The Big Game? Were you not… entertained?