Vic Fangio wants to get rid of divisions

On the same day Commissioner Roger Goodell threw cold water on the idea of seeding the six playoff teams without regarding to whether a team has won its division, Broncos coach Vic Fangio took it a big step farther: Get rid of divisions completely.

“Since the league went to 32 teams, which was when the Texans came in in 2002, my ideal suggestion, which has never been put forth in front of anybody important — I don’t think there should be divisions,” Fangio told reporters on Wednesday. “I think you’ve got 16 in each conference. Everybody should play each other once. That’s 15 games. Then if you want a 16th game, you play a natural rival from the other conference — Jets and Giants play every year, Eagles-Steelers, Texans-Cowboys, etc. — play every year. . . . [Y]ou’ll avoid the problem that’s going to happen this year where probably an 8-8 team is hosting a 12-4 team. You’re going to get the six best teams in each conference. The divisions always float. There are some that are easy some years, some that have a bunch of good teams, that switches back and forth every couple years. I just think that’d be a good way to avoid it.”

It’s a simple, sensible, and equitable approach. Fifteen games per year against the other teams in each conference, and one interconference game.

“I just don’t think divisions are going to get you the best six every year,” Fangio said. “You want the best six? Do it like they do in college. . . . [Y]ou play everybody once.”

This would take away the home-and-home series that often make divisional play compelling, especially late in the season when one team is playing for something and its division rival isn’t. Also, the reduction from four interconference games per year to one would result in some teams rarely if ever playing other teams, especially if the interconference games would be tied annually to a natural rival.

Fangio was asked whether he’d like the media to push his idea.

“Are you getting the hint?” he said, laughing. “Do you like my idea? . . . [L]et’s solve the next problem and play everybody once. Let’s get the top six teams in there.”

It definitely would produce a much more pure and fair ranking of the best teams in each conference, which the NFL should want. But it seems like too much of a dramatic change to ever get any real traction.

Indeed, if owners won’t even entertain the idea of seeding playoff teams based on record without giving inferior division champions a home game, they’d never remove the subcategories in each conference.

Then again, they did it once before. After the 1982 strike, which trimmed the regular season from 16 to nine games, the NFL used a 16-team Super Bowl tournament, with eight of 14 teams in each conference qualifying.

Even if nothing comes of this (and nothing surely will come of it), Fangio’s idea represents the kind of creative, proactive thinking that happens all too infrequently within the NFL, which tends to embrace changes slowly, reluctantly, and often only when required in response to an embrassing outcome.

I like this idea. I remember a 7-9 Seahawks team, sliding into the playoffs as Divisional Winners hosting a 12-4 Saints team. They won by virtue of playing at home. If they had been force to play the same game in NOLA they would not have stood a chance.

Patriots had a year where they missed the playoffs with I think was an 11-5 record or 12-4 because of tie breakers with the eventual WildCard teams. But yet an  AFCN team went with a 9-7 or 8-8 record. 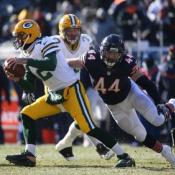 "Jay Cutler can throw a football and cut it through the elements as well as anyone out there. Arm talent immense, the upside you love it. The reason I'm critical is I wish I had it"-Trent Dilfer

No, not a round Robin. Just getting the 6 best teams into the playoffs, ranked by record only. Seeding would be Best to worst. Playoffs would run the same. Two wild card teams play the 3rd and 4th seeds. Seeds 1 and 2 get a bye, like now.Just getting rid of the garraunteed playoff spot for the Divisional winners. There would be no more divisional winners. Just the best 6 team records make the show.

IDK... I can see the logic in it, but I don't like it. I think football would lose a lot by removing the Divisions, the rivals. I look forward to the division games, they mean something all on their own. You take that away and you take away a huge part of the smaller goals in a season.

Like ours this year. We basically are out of the playoff hunt, but we still have that GB game. If we beat GB, that is a small win for the season. Otherwise all i have to look forward to as a fan is being a top 6 team and making the playoffs. Anything less is a wasted year.

IDK... I can see the logic in it, but I don't like it. I think football would lose a lot by removing the Divisions, the rivals. I look forward to the division games, they mean something all on their own. You take that away and you take away a huge part of the smaller goals in a season.

Like ours this year. We basically are out of the playoff hunt, but we still have that GB game. If we beat GB, that is a small win for the season. Otherwise all i have to look forward to as a fan is being a top 6 team and making the playoffs. Anything less is a wasted year.

But like Vic, I get tired of seeing a 7-9 team from a weak ass Division get a free püass to the show and a truly good team get told, better luck next year!

Earlier this week, Broncos coach Vic Fangio threw out the idea of doing away with divisions.

The top six teams in each conference would advance to the postseason.

It’s a nice idea that creates a lot of discussion. It’s also not going to happen.

Fangio’s suggestion was borne out of the NFC East’s struggles this season. The division winner could have a losing record, leaving the Cowboys or Eagles to host the second-place finisher in the NFC West, which figures to have one of the best records in the NFL.

“I don’t see that,” Jones said Friday on 105.3 The Fan. “I think too many people are traditionalists here and believe in the way we’ve done things with divisions. You’re going to have the odd year where eight divisions all are not playing well. Historically, the [NFC] East has been strong in our league. But obviously this year certainly being pointed out that the East is struggling more than normal, but I certainly don’t see a big appetite for realignment.”

Of course Jones is against this idea. He benefits from playing in the weakest Division in the NFC. Year after year, 8-8 or 9-7 wins that division. This year 7-9 is probably adequate. Why would he vote to change his automatic invite to the show? When was the NFC East a real powerhouse? When was the last time the NFC East delivered a Divisional Champ and two Wild Cards?

Vic isn't wrong, but there is still a lot of value in the division system and I don't see it changing any time soon unless what has happened in the NFC East this season becomes more of the norm.  It's not as if seasons play out like this one more often than not.